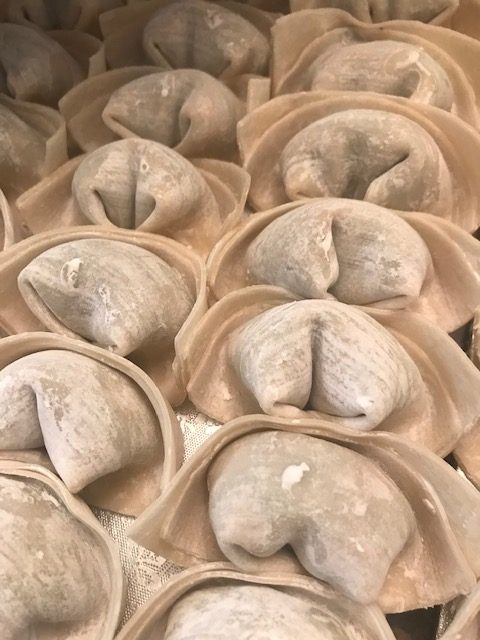 This is my last post for 2018, and as I wrap up the year, I’m going to share a very traditional recipe that also requires some wrapping up.  Today I’m sharing our family recipe for Shanghainese wontons.  It takes a bit of effort, but homemade wontons are much yummier than store-bought frozen ones, definitely worth the time.  We always make extra to put in the freezer for later as well.

Leaving aside cantonese wontons for now, there’s usually two types of Shanghainese wontons:  small ones or big ones.  Literally that’s what they’re called in Chinese.

Small wontons （小云吞）- usually filled with just meat and maybe some shrimps, these are “wrapped” as if the person making them was in a big hurry, just squeezed together to seal the meat in the wrapper.

Large wontons (大云吞） – or you can look at it as the standard size, are filled with a mixture of meat and veggies and are properly wrapped and folded neatly.  Today’s recipe is for these large wontons.

Typically, wontons are served in soup, which is usually a light clear broth/stock, with chopped green onions and a bit of white pepper and sesame oil.  You can also serve them dry with a spicy and tangy szechuan style sauce.

Wrapping the wontons. Set up a little wonton making station at your dining table or countertop and make yourself comfortable. You should have laid out in front of you: your bowl of filling with chopsticks to be used for scooping (or teaspoon if you like), wonton wrappers, a small bowl of cold water, and some non-stick trays to place the wrapped wontons on.

*Instead of watercress, you can also use another leafy green like boy choy.  Boy choy tends to contain more water, so you might need to use more of the veggie and squeeze more of the water out after cooking the veggie.   *** Any extra wontons can be frozen.  The trick is to freeze them for a little while stil on the trays, then take them off and pack them into bags.  This will prevent you from having a giant block of 20 stuck-together frozen wontons. *** You can serve frozen ones the same way, just need to cook a little longer as the frozen fillings need a bit longer to cook.  Or, you can serve them potsticker style but pan-frying on a non-stick pan, adding a of bit  water and placing a lid over it to steam and cook thoroughly, then remove lid and finish by letting the wontons cook until all liquid is dry and the bottoms are golden and crispy.  Careful not to let it burn.