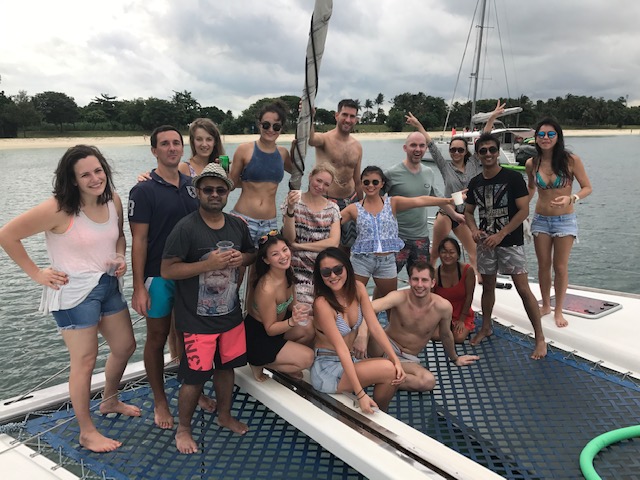 Probably one of the biggest hurdles to overcome when moving to a new city is making new friends and forming new social circles.

I moved to Sydney in 2010, and then picked up and moved again in 2014 to Singapore.  The challenge of finding new friends is definitely real but essential for feeling happy and settled in a new place.  Even now, relocated back in Vancouver, I find myself going through this same challenge again.  Making new friends is arguably a lifelong process; here are some strategies I’ve employed over the years…

In this day and age, there are many different social networks available with the click of a mouse.  Meetup groups were one of the first organisations to come online, but there are many others.  My favourite is Internations.

Internations is a big international network with a presence in most large cities.  Some cities are more active than others.  In Singapore, I met a lot of good friends through Internations (directly or indirectly); there are loads of activities and subgroups in the Singapore chapter.  There are “official” events which are big mixers of what could be several hundred people and smaller interest group events organised by other Internations’ members.  After attending a few large mixers, I found the smaller events to be more suitable for me.  I eventually found a friendly group of people playing beach volleyball on Sundays and another group hosting weekly bootcamps.  Once I started attending these two events regularly, I really connected with people and made friends.  There is a small monthly fee to Internations, which was worth it in my opinion.  Once I’d been in Singapore long enough and had a good network, I eventually cancelled my membership as I found I wasn’t going to their events as often.

If you’re in a specialised profession, try to find organised groups in your new city.  For example, a young legal professionals networking group might exist, or women in tech, or a local Lean In chapter.   These are great places to network and get inspired about your profession, and also a good place to meet like-minded individuals to form a friendship with.

This is the easiest way to meet new friends, though you have to show some interest in a sport!  Having said that, enthusiasm is key, and despite having no skill and virtually no improvement over the many months, I still regularly joined my beach volleyball group in Singapore.  For me, that was a social activity more than a sports activity, but equally enjoyable!

Team sports are the best for forming a regular tribe.  I had friends who were part of flag football, soccer, netball groups and it really is an awesome way to meet friends and stay fit!  Dance classes also fit into this category.  Some of my friends were regulars in Westcoast Swing, Salsa, Ciroc classes in Singapore and became so good they were involved in competitions and teaching.  Their social networks were eventually filled with fellow dancers too!

I also discovered organised exercise classes as a good way to meet people.  My regular bootcamp classes in Singapore became an important part of my life.  Never would I have thought I’d enjoy bootcamp, but the fitness results and the camaraderie those classes gave me were awesome.  As soon as the weather turns warm in Vancouver, I’m going to be one the lookout for something similar here.

Depending on your living preferences, lifestage, and whether you’re attached or not, sharing flats can be a great way to meet new friends.   I’ve lost count as to how many flatmates I’ve had over the years, and apart from a couple of people that I didn’t really click with and one who refused to give me my deposit back, I’ve met some amazing friends by living with them!  Some of my flatmates from my days in Sydney are friends I still connect with and reach out to for advice often.

In Singapore, my first flamate was a Singaporean social butterfly and knew all the parties in town which was a nice way to be introduced to other people and find things to do in my new city.  My favourite flatting experience was in my last apartment in Singapore.  I moved into a “girls” house, with a bubbly Californian and friendly Dane.  Having those two inspiring women around to encourage me in my career, help interpret text messages from guys, and enjoy a glass of after-work wine with was the best.  When the lease came up and they each moved out with the men of their lives, I decided to look for new awesome girls to fill the void.  By then, I had a good circle of friends in Singapore and was able to pass on the baton by introducing my newbie flatmates to Singapore and to my circle.

My flatmates became my “family” while living abroad and really made it feel like home.

This is an obvious one and hopefully if you’re moving to a new city for work, you’ll have an office full of awesome colleagues you can connect with.  I saw this happen time and time again for the new overseas recruits we brought into our Sydney office.  Lucky for these newbies, our Sydney office had grown to a considerable size by then, full of young twenty-somethings looking to have fun.  It was a slightly different environment when I first moved to both Sydney and Singapore, as I was one of the first employees in both offices, so I didn’t have that immediate network I could rely on; I relied on the other channels listed above more.

Going back to School

Have you ever thought about taking a language?  Or learning to code?  There are loads of weekend/evening classes available at local colleges and special schools and these types of courses can be a great way to meet people too.

I spent two weeks at School of the World in Costa Rica last year and another three at Colombia Immersion in Medellin.  I wanted to combine travel with learning, so found these two great places where I also met some interesting fellow students.  Right off the bat we had lots of common, all being travellers wanting to learn Spanish, so it was a natural way to become friends.

There you go, some tried and true ways I’ve made new friends over the years.  Once you’ve built up a small circle, take the time to nurture those relationships.  Take initiative to suggest or organise group events and introduce people to each other.  Before you know it, you’ll be meeting all sorts of interesting people through your new friends and your network will grow organically.