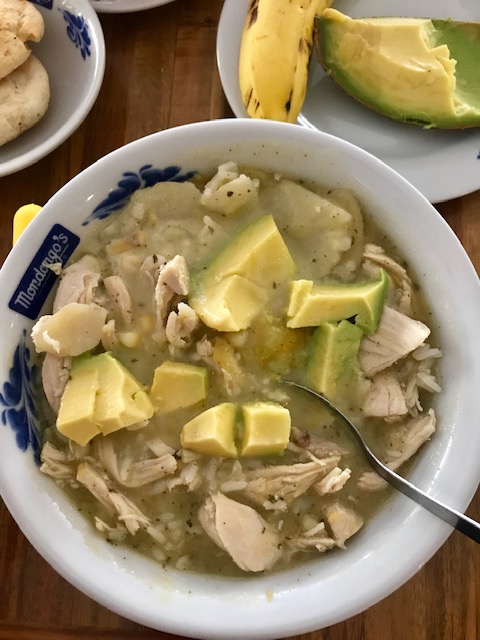 For me, one of the best parts of travel is to taste the different foods of another culture.  Colombia has not disappointed so far, and though I am not a fan of ALL the food here, I love observing and trying.

Colombia is not the land of healthy green juices and salads (at least not yet, but it’s coming fast I’m sure).  Tis the land of fried empanadas, platanos, french fries, fried chicken, fried dough balls, and more.  If you like greasy fried food, you’ll be in heaven. Empanadas – corn flour “dumplings” filled with beans, cheese, and meat.  Relatively easy to make!  We made these as part of our Spanish lab class in Jaco.  Just corn flour mixed with water, made into a dough, then made into balls, flattened, then filled with filling and folded over into half moon shapes.  Slide them into a vat of hot oil and fry until golden.

Mondogo – tripe soup.  I didn’t get a chance to try this and not being a fan of tripe, I wasn’t too disappointed. Bandeja Paisa – a platter of food typical of the Antioquia region (where Medellin is).  Consists of beans (lots of beans), fried banana, rice, a little bit of salad, and meat.  A vegetarian friend liked to order the vegetarian version of this dish, which replaces the meat with a fried egg.

Buñuelos – fried balls of dough.  The dough has cheese incorporated in, so has a slightly savoury flavour.  Can be found all over the city.

Menu del dia – my favourite lunch.  Almost everyday, we’d finish class at 1pm then head to the Plaza de Americas marketplace or another restaurant nearby to order the Menu del Dia (menu of the day).  This always includes a soup and a main plate of a choice of meat, rice, and some sides.  The sides can be a salad of sorts, fried bananas, and always a little arepa.   In Laureles, we were always able to find a delicious and filling menu del dia option for $10,000 COP (<$5 CAD). Arepas – corn pitas that are filled with a variety of different fillings like cheese, chicken, meat, corn, vegetables.  Delicious, filling, and a good fast meal. Limonada de coco – aka coconut lemonade.  A very refreshing blend of coconut milk, chunks, and lemonade.  I had one of these pick-me-ups after wandering under the hot baking sun of Cartagena.

Platanos – aka plantains.  These look like big, green, unripe bananas in the super markets.  Bananas are BIG in Latin America.  Lots of different varieties are served in different ways.  One of the most delicious things made from plantains are patacones.  These are plantains that are fried, flattened, then fried again, resulting in crispy thick slices of yumminess, to be served topped with meat, mushrooms, guacamole, and cheese, or cut up and dipped into salsa and guacamole. 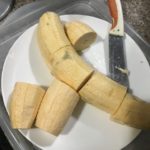 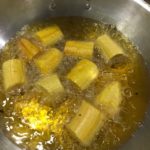 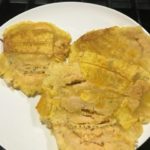 Ajiaco – a hearty soup of three different types of potatoes, served with cream and avocado.  I tried this at a restaurant in Poblado and could barely finish my giant bowl. 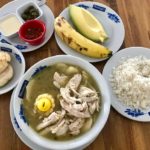 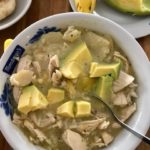 Now onto the exotic fruits and vegetables of the region… Aguacate – Avocados in this country are HUGE!  Easily three times the size of regular avocados. Granadilla – my favourite discovery.  These look like passionfruit from the outside, but are much sweeter and the seeds are much larger.  The fruit is about the size of an apple, orange and oval in colour and shape.  Easily opened by hand, you can then scoop out the seeds that are wrapped in a sweet gooey juice and eat them right away.  Also delicious topped on yogurt! Uchuvia – gooseberries.  Who knew they were so common and cheap here!? Zapote – kind of  like a cross between a persimmon and yam, you peel these fruits and eat the orange coloured flesh inside.  The flesh is wrapped around big black seeds and are a bit stringy.  Also not my favourite

Cactus fruit – my first time trying this. I bought a couple and watched a Youtube video to learn the best way to eat them.  Covered in a thick skin, you first remove the skin by peeling, then eat the flesh inside.  They have a texture similar to dragon fruit, but the seeds are much bigger and harder.  I didn’t like the seeds so chose to spit them out, so they ended up being a bit of work to eat!  Interesting, but not my favourite. 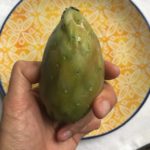 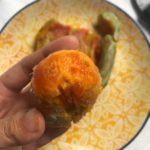 Peijibaye – I saw these at the grocer across the road in Jaco and bought a couple to try.  Sold already cooked, I was able to peel and eat these.  They have a dry, flaky texture, almost like a sweet potato.  Apparently they can’t be eaten raw.

Tomate de arbol – tree tomatos.  I bought one out of curiosity to try it and didn’t like the flavour much.  Apparently used to make juice, not really good for eating

Colombia is abundant with exotic fruits and vegetables.  As someone who’s travelled a lot, I thought I’d seen most exotic fruits already, but it’s nice to know there’s still so much left to discover!  I didn’t get around to trying some of the others, will save them for the next Latin American adventure.