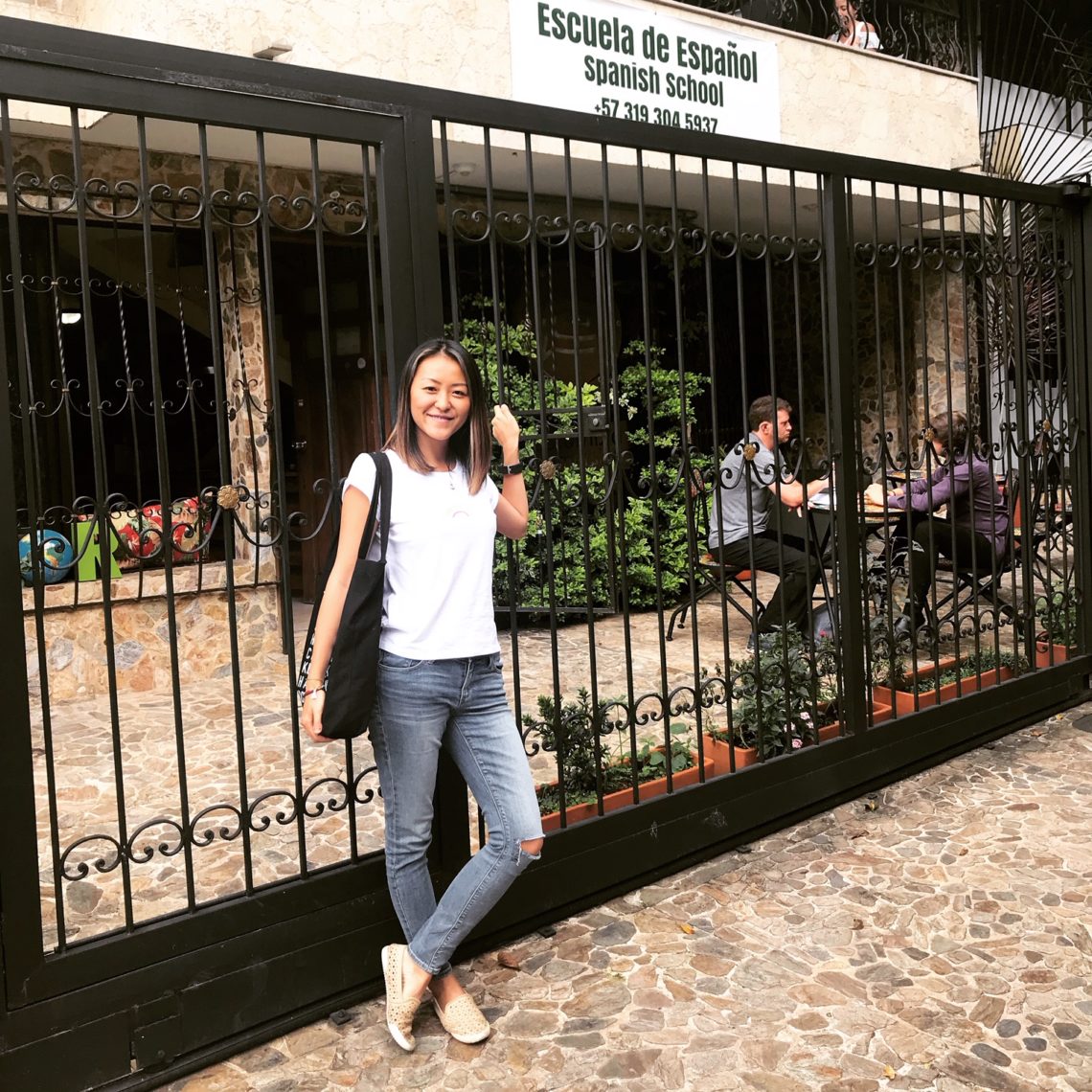 According to my Spanish profesora, 5 years ago, there were no Spanish language schools in Medellin. Perhaps 5 years is a bit of an exaggeration, but the point is that in very recent times, there’s been an explosion of casual Spanish schools being offered in Medellin, which speaks to the growth of tourism in the city/country, and the popularity of learning Spanish.

I chose Colombia Immersion for my language classes in Medellin after a recommendation from a fellow traveller I met in Jaco. With two locations (the original in Envigado and the newer one in Laureles), small classes, and the option to choose between full immersion or several different intensities of classes, it offered the flexibility I was looking for. Another key deciding factor was that neither of the locations are in Poblado, the expat & bar heavy centre of backpackers. I wanted to be somewhere with a more local neighbourhood feel, not surrounded by young backpackers looking for a party every night.

Three weeks on, I can say it was the best decision I made for this Colombia trip. Initially I only signed up for one week. Being a commitment-phobe, I wanted to try the school and the city for one week before deciding to sign up for more. On the morning of my first day, I completed a language test so they could place me at the correct level. During the first week, I could only join a 2 hour a day basics 1 class in the afternoons. In week two, I started with a fresh group of students in Basics 2 and was able to attend my classes in the mornings from 9am – 1pm. This format and timing suited me much better, as I found the afternoon classes (which ran from 2pm-4pm) cut into the middle of the day and I always had to rush back from some sightseeing to make the 2pm and fell into an afternoon slump in class which made it hard to concentrate. In the mornings, I am always much fresher and the basics 2 class was the perfect level for me.

Colombia Immersion offers several different programs. The full immersion includes 4 hours of class + 1 hour of coaching daily. Coaching is where you get to practice speaking and learning with a native Colombian. If that is too intense, you can do just the 4 hours of class daily, which is the option I took. For those who want a lighter offer, there is a half intensive option of 2 hours a day. And of course, personal one-on-one classes is also an option for those who want dedicated and customised teaching.

They also offer options for accommodation, should you require it. A few students in the school chose to do the homestay, where they stay with a neighbouring family and become immersed in local life too.

The atmosphere of the school is relaxed and friendly. There is a weekly schedule of activities that you can attend if interested, some of which are free and some of which have an additional fee, or are included if you do the full immersion. For example this past week’s offers were:

Monday – walking tour of Laureles. I did this my second week and found it useful to hear some tips and tricks from our guide, Felipe, a super awesome pequeño Colombiano who seemed to be in charge of all the social activities. Felipe did his tour in Español and I was surprised to see I could understand 70% of what he was saying. His deliberate slow and well enunciated speech also helped.  I imagine for those at the Envigado location, there is a similar tour on offer for that neighbourhood.

Tuesday – Tejo.  Tejo is a unique game in Colombia where teams throw heavy metal disks (the Tejo) at a square of clay-like dirt to try to score points.  If you hit the dirt at just the right spot and set off the gunpowder they have buried there, you score big.  Points vary depending on where your Tejo lands.   These excursions combine students from both locations so it’s a good chance to mingle and make new amigos!

Wednesday – Patacones & Trivia.  A big group showed up to learn to make Patacones at the Laureles school this week.  Patacones are plantains that are fried, squashed flat, then fried again.  You can serve them covered with guacamole, cheese, and various other toppings, or with salsa and dip.  It pretty much sums up Colombians love of greasy fried foods.  Once full from patacones and beer, we started a short game of Colombian trivia.  Guess who’s team did not win -_-.

Thursday – Manrique Barrio tour.  Thursdays seem to be the day that the school organises an excursion to one of many developing barrios or neighbourhoods within Medellin.  I didn’t attend the Manrique one this week, but did join last week when we went to Greenbelt (Barrion 8) to check out the development of the green pathway in a poor community.  The pathway lead up to a fantastic lookout of  Medellin and was well worth the trek up the mountain.  These longer tours usually have a small fee attached.

Friday – Language Exchange.  A weekly occurrence, the language exchanges gives students a chance to have conversations with local Paisa who want to practice their english.  This is just one of many language exchanges that can be found throughout Medellin.  I’ve been to a few in my three weeks here and they are an excellent way to meet new people and practice un poco de Español.  The Colombians who attend these tend to be smart, young, keen English learners.  Most have self learned English by watching TV, reading, etc.  So impressive.

I’ve really enjoyed my three weeks here and have met some awesome people.  What struck me was how similar all of us are.  Despite different ages, backgrounds, and nationalities, most of us are here for an extended period of time, either taking a sabbatical of sorts or going through a transition phase in life.  It’s easy to connect and make friends with these like-minded travellers.  I’ll write more about some of the interesting people I’ve met here, later. PS – A random and bizarre piece of information.  The Laureles location is located at the house where Pablo Escobar died.  I did not know this until one week in, and felt the goosebumps on my skin rise when I found out.  Of all the bloody places in the city (pardon the pun), what are the chances?  As a result, there are daily tourists and narco tours that drive or walk by the school to take photos.  Pablo’s shadow over the city is still undeniably a tourist draw, but most Colombians aren’t too happy about this.  Instead they want visitors to see Medellin as a progressive city that’s managed to transform and pull itself out of many dark years of violence and drugs.  I wholeheartedly agree and will have a special place in my memories for this valley city of friendly Paisas.