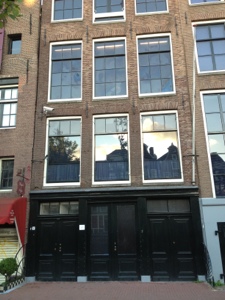 Years ago, I read the diary of Anne Frank and must admit that I’d forgotten many of the details now. I’d forgotten that the house where the Frank family hid, was right in Amsterdam, but once I realised, I had to go for a visit since the house is now a museum.

For those unfamiliar with the story, Anne Frank is a young Jewish girl who grew up during Nazi Germany. Her family emigrated to the Netherlands to escape Hitler’s regime, but when the Nazi’s invaded the Netherlands, they were forced to go into hiding in their father’s office building in the centre of Amsterdam.

The museum is one of the top attractions in Amsterdam and while it is possible to skip the queue by purchasing the tickets online, there is still usually a very long line to get in, for those who are not prepared in advance. Being one of those ill prepared, I sought to avoid the peak hours and went after dinner, around 7:30. Lucky for me, I didn’t have to wait long at all. Within 5 minutes an American (I presume) walks by the queue asking “Does anyone need a single ticket to the museum?” Most people in line were couples or groups, so I respond “I do…”. Turns out they are a family who had booked their tickets online four months ago but the mother-in-law couldn’t make it so they had an extra ticket to spare. Score! For the same price, I go with the family and bypass everyone else in line. VIP haha.

Inside, there are photos, momentos, and video clips about the Frank family, their friends who helped with their hideout, and information about the Jewish people who fled Nazi Germany. It is a heartbreaking museum; the house is empty, but old photographs show what the inside looked like while the families were hiding there. We see the bookcase that hid the doorway to the back part of the house and climb through the tiny doorway, much like how Anne would have had to. I can’t believe they lived in this tiny little space for over two years, never being able to go outside, having to tiptoe over the creaky floorboards for fear of being discovered.

Sometimes numbers and stats quoted from history can seem like just a number without true meaning, but stories like Anne’s and the museum here just remind us that each person who died during the holocaust, or any war for that matter, is someone’s daughter, someone’s mother, someone’s father, someone’s son, and had dreams and hopes for the future.